However, government agencies have taken notice and misclassification has become a hot issue. Around the country, legal 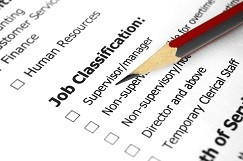 Beginning in 2010, the U.S. Department of Labor initiated a “Misclassification Initiative” in which it entered into memoranda of understanding with several states to coordinate enforcement efforts and to share information between the state and federal agencies about non-compliant companies. Washington is among the states that have agreed to share information with the Department of Labor in an effort to cooperate in the crackdown.

The Internal Revenue Service has also been ramping up efforts to ensure that employees are not misclassified as independent contractors. The IRS cares about this because of the loss of revenue from income tax withholdings, which apply only to employees, not to independent contractors. If you are unsure of the classification of a worker, you can submit an application, IRS Form SS-8, for a free-of-charge determination about the worker’s status for federal tax purposes. Employers should still consult with an attorney, however, to confirm worker status for federal tax purposes or to determine worker status for other purposes, such as complying with state and federal minimum wage laws.

Consequences of Misclassification Can Be Severe for Employers

Employers found to have misclassified workers as independent contractors rather than “employees” face severe penalties, including:

There is no one single test under the Internal Revenue Code for classifying workers as either employees or independent contractors. Though the area of law is governed by statute, the classification of workers is largely a determination under the common law. The IRS has identified 20 common-law factors to be considered in this determination. Revenue Ruling 87-41 (October 30, 1996). No single factor is determinative on its own. When considered together, the factors point to the following items as evidence of the true nature of the relationship:

In Washington, common law historically followed the “right of control” test, which focused on who had the right to control the worker’s day-to-day activities and performance of the work. However, in July 2012, the Washington Supreme Court held that the “economic realities” test used under the Fair Labor Standards Act also applies to cases brought under the Washington Minimum Wage Act. The key question has, thus, become “whether, as a matter of economic reality, the worker is economically dependent upon the alleged employer or is instead in business for himself.”

Bottom line:  Employers deciding whether a worker qualifies as an independent contractor should consult with an attorney and audit worker classifications regularly.