Updates and Guidance on Recent Immigration Sweeps By ICE 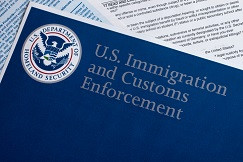 San Antonio and New York.  President Donald J. Trump commented on the sweeps via Twitter, naturally, like this: “The crackdown on illegal criminals is merely the keeping of my campaign promise. Gang members, drug dealers & others are being removed” (emphasis added).

Apprehension and deportation proceedings against active gang members and drug dealers are neither new nor controversial enforcement priorities.  But businesses with workforces composed of significant immigrant or migrant populations are now faced with a troubling question: Since President Trump’s immigration order allows agents to arrest anyone seen to pose a risk to either public safety or national security, “in the judgment of an immigration officer,” how aggressively will enforcement teams pursue the “& others”?  As of today’s date (February 17, 2017), there are reports of ICE agents making unannounced visits to agricultural employers in the Columbia Basin, Pasco, and the Lower Yakima Valley.  At this point it is unclear whether any of these visits will escalate to the point where agricultural workers are rounded up and subjected to deportation proceedings.

Background of Immigrant Labor in Agriculture

There are a reported 11 million undocumented immigrants in this country, and it is estimated that more than 8 million of them are actively employed in the American workforce.  About two-thirds of undocumented workers have lived in the United States for at least a decade.  The Pew Research Center estimates that Washington State is home to approximately 250,000 undocumented residents, the majority of whom are employed in agriculture or construction.  It is  estimated that as many as 78% of the seasonal farm laborers in the United States (National Agricultural Workers Survey, Farmworker Justice) have obtained employment by presenting falsified work authorization documents.  If those numbers are accurate, then there may be as many as 117,000 undocumented immigrants working to bring Washington’s $10 billion worth of agricultural commodities to market this year alone.

The Obama administration immigration enforcement scheme was termed “Operation Cross-Check”.  It prioritized apprehension of what it termed “fugitives” - immigrants who were convicted of significant criminal behavior, those who were deemed to pose a public safety or national security threat, and those who had entered the country after January 1, 2014.  According to ICE, 99.3% of deportations in 2016 “clearly” met those priorities.

The Trump administration has publicly adopted the same prioritization (e.g., going after “criminals”), but through an executive order that has drastically expanded the target zone. Now, in addition to deporting undocumented immigrants who have been charged with a crime, agents are under express orders to prioritize removal of immigrants who have “engaged in willful misrepresentation in connection with any official matter or application before a governmental agency”.  This expanded enforcement priority arguably includes laborers who may have obtained a false social security number or green (permanent resident alien) card, and even those who willingly pay income taxes using any incorrect personal identifiers.

Employers could be caught in the middle.  Employers are required by law to review work authorization documents at the time of hire and to certify that those documents appear valid on their face.  Employers cannot, however, specify which documents they will accept from an employee, and it is unlawful to treat any applicants for work differently because of their national origin or citizenship status.

So where does that leave agricultural employers in the event of an ICE enforcement action?

Here are our recommended steps:

If you would like to contact a Stokes Lawrence attorney to help guide you through an ICE enforcement action please call any of the following:

One reason that both the Bush and Obama administrations reduced their reliance on workplace raids was because of the impact on families. Some studies have found that for every two immigrants apprehended there is at least one child left behind - and the child, most often, is a U.S. Citizen. The raids themselves often times seemed designed to incite a level of panic and distress in the workplace, and apprehension of individuals are sometimes reported to involve physical restraint.

It is important to know that your employees have important legal rights. They have the right to remain silent and the right to speak to an attorney. Importantly, they have the right to respectfully refuse to show or sign any documents until they’ve had the opportunity to seek legal counsel. There are reported instances where apprehended subjects are asked to sign documents that allow for immediate deportation, without any hearing or other form of due process.

The Northwest Immigrant Rights Project has collaborated with attorneys and other volunteers from around the State to create a Rapid Response Network (RRN). The RRN is designed to react immediately to large-scale raids and to provide basic immigration advice to as many immigrants as possible. In some instances the RRN may be able to help workers preserve their legal rights, to navigate the bond process, and to help the workers make arrangements to care for any children who may be impacted by the raid. The Northwest Immigrant Rights Project has also accumulated a helpful array of resources for workers, including a checklist to prepare for possible immigration raids.

In the event your company is subjected to a raid, please consider reaching out immediately to the RRN for the purposes of providing basic legal advice and humanitarian support for your workforce.