The Washington Supreme Court yesterday issued a slim majority decision (5-4) in Carranza v. Dovex, finding that Washington law requires agricultural employers to pay piece workers a separate hourly wage for time spent performing “activities outside the scope of piece-rate picking work.” Labor advocates have characterized the time spent in these activities as “unproductive time.”  The Court found that even piece-rate workers  have a statutory right to receive the state minimum wage for each individual hour worked, and that  “time spent outside the scope of piece-rate picking is work” that must be paid at an hourly rate not less than minimum wage. 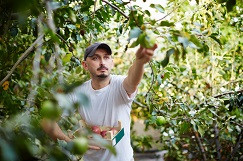 The Court did not explicitly rule on what activities may be included in the scope of piece-rate picking. Instead, the Court found that this was a “question of fact” that must be determined by the trial  court under the specific circumstances of the Carranza case. A decision by the trial court will likely not occur until after the conclusion of this year’s harvest. Any future cases involving claims of “unproductive time” will similarly be determined according to the specific facts of those cases.

Much of the public discussion about this case revolved around concerns that employees would have to be separately compensated for each incremental element of the work day (going up and down the ladder, moving from tree to tree). As the case progressed to the Supreme Court, the plaintiffs acknowledged that “tasks that are not strictly picking fruit, including going up and down ladders, moving between trees, and emptying fruit bins” are within the scope of piece-rate picking work, and the Supreme Court ruling accepts that those activities are included in piece-rate compensation. Plaintiffs who claim that they have not been paid for “unproductive time” will need to prove that they engaged in activities that were “outside the scope of piece-rate picking work.”

The extent to which this ruling applies to piece-rate work that does not involve harvesting (such as pruning or other growing-season work) is not yet clear.

Despite the broad nature of the ruling, the Court hinted at the types of activities the trial court may consider to be outside the scope of piece-rate picking. In its analysis, the Court discussed cases where hourly employees were not paid for travel time or attendance at pre-employment meetings. While this decision may fairly be characterized a victory for labor advocates, the Court’s discussion of activities that are outside the scope of piece-rate work appears to be consistent with prevailing practices among Washington orchardists, and consistent with the advice Stokes Lawrence has provided over the past several years. Most growers already pay hourly for travel time between orchards, orientation and safety meetings, and other significant down time such as weather or equipment delay. Other activities may be viewed as being outside the scope of piece-rate production, but will be dependent upon case-specific facts.

There are many options for modifying your compensation plans to comply with the Carranza decision: paying only an hourly rate, paying an hourly rate with a production bonus, or paying a mix of piece-rate and hourly compensation. What is right for you will depend upon your labor market, your existing contractual obligations (such as H2-A contracts), and your individualized facts.  Please contact the employment and agriculture lawyers at Stokes Lawrence for advice about how this court ruling affects your operations, or to modify your operations in light of this ruling.